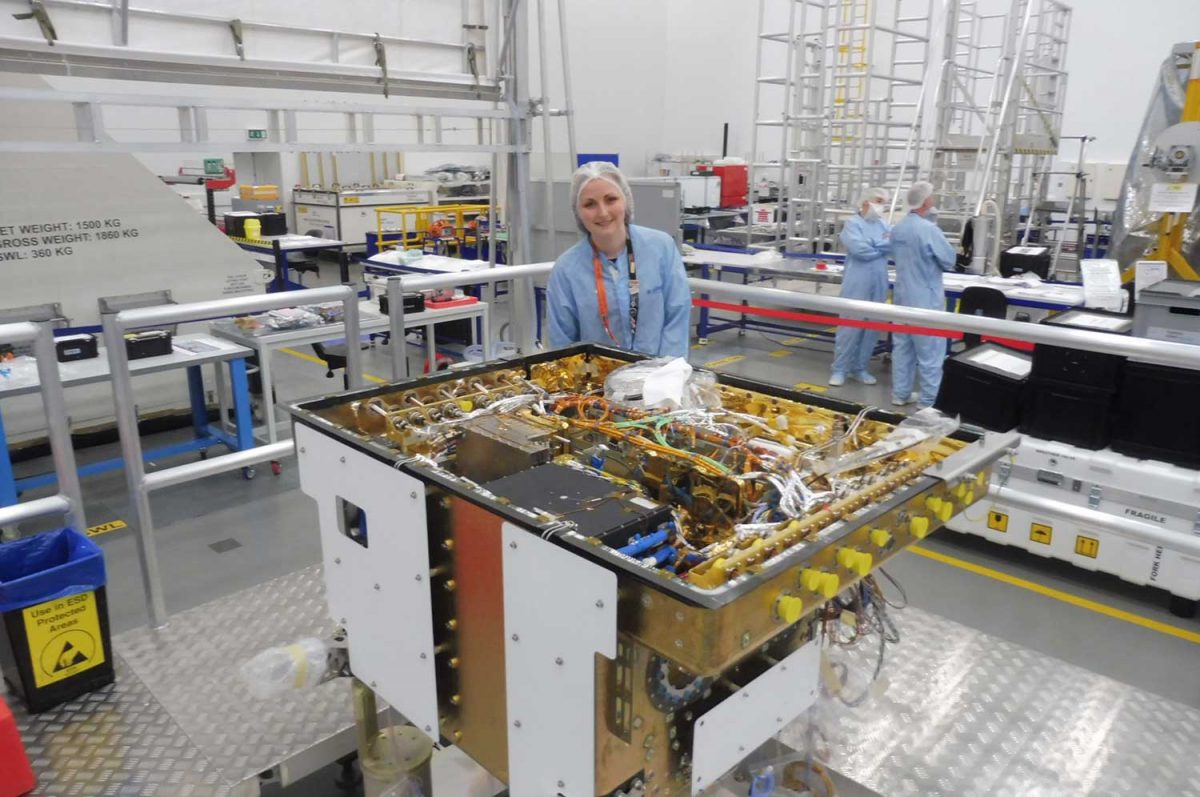 Congratulations on becoming the youngest person ever to become a Fellow at the Institution of Mechanical Engineers! Can you describe a typical day in your work life, for us?

I’m the Lead Spacecraft Structures Engineer for ExoMars – Europe’s first Mars Rover mission. That means I’m in charge of the team of experts and specialists who design the structure for our Mars Rover. My job is basically in an office, working at a desk but talking to lots of different people. I do some analysis on my computer, and the other experts all have their specialist area, like 3D modelling, Materials, and Analysis and so on, and together, we have to come up with a design that will work on Mars. 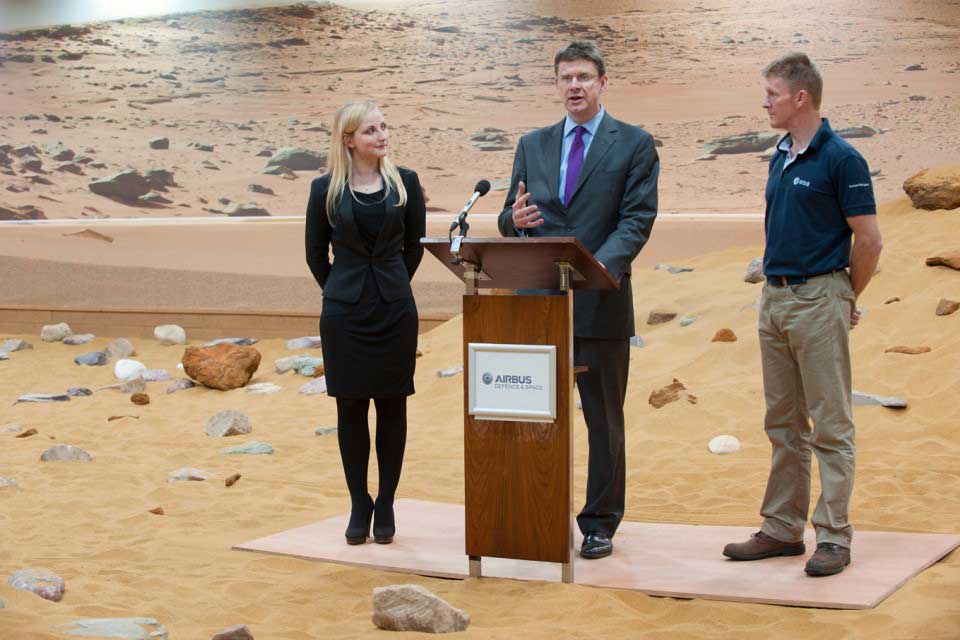 How did you get into space engineering?

When I was at school I didn’t have any idea what I wanted to do with my life! I was quite good at Maths and Science, but my favourite subjects were creative ones, like Art and Technology. One of my teachers suggested engineering, but – like a lot of people – I didn’t understand what engineering was, and thought they meant something like car mechanic, which I wasn’t interested in. Luckily, I saw a story on the news around that time, about Beagle II, which was a probe going to Mars, and the reporter said that it was “designed by British Engineers.”. Well I had no idea that engineers designed Mars probes, and definitely not that the UK had its own space industry doing exciting things like that right here! I signed up to do a degree in Mechanical Engineering and the rest is history!

I mostly liked making things. It didn’t matter whether it was Lego, or sticking cardboard tubes together to make marble runs, or making cushions or wooden boxes or jewellery in DT classes, I just loved coming up with new designs and then building them. I guess that’s why being an engineer is such a good career fit for me. I still get to design things and see my ideas made in real life. Just now those things are also going to Mars!

Tell us about the challenges you faced when designing the ExoMars Rover. We imagine there are a lot of complicated factors involved in getting a rover to Mars!

There are all sorts of difficult things about a mission to Mars – I’ve had to learn about all sorts of interesting things to find out what effect they’ll have on our mission. Mars is very cold but also the temperature changes enormously from day to night; maybe from -120 degrees centigrade to -10 degrees centigrade on a fairly standard day. That’s a huge problem for our rover as things like materials behave very differently when they’re that cold, but also as all materials expand and contract with temperature change, but at different rates. When you have such a huge temperature change those effects become quite dramatic, and things start to tear themselves apart. Then there’s the Mars dust which is really sharp and abrasive and gets into all of our motors and moving parts and scratches and damages them. And the radiation as Mars doesn’t have a protective magnetic field like Earth does. Mars has much less protection from the atmosphere than we do, as theirs is so thin so you get bombarded by radiation on the surface!

What will the rover be doing when it finally embarks on its mission? What are you hoping to find about about the red planet?

Our rover is looking for life on Mars. That big question – are we alone in the Universe? Up until now most of the missions to Mars have been looking for “the conditions to support life.” That means, if humans went there, could they survive? But as those missions have taught us more and more about Mars, we’ve actually learnt that there could still be separate, Mars life, living there already, or that lived there in the past. That’s what our mission hopes to find out. To do that, we have a REALLY big drill – 2 metres long! That’s because of the radiation – as I mentioned – is very strong at the surface, and that could kill anything living at the surface. But 2 metres down it should be protected enough by the soil above that it might be able to survive… 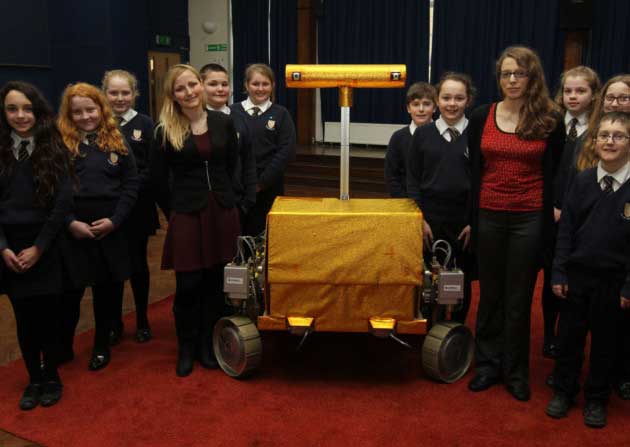 You are an engineering ambassador which means you give a lot of talks at schools across the UK and participate in wider outreach programmes such as Stargazing Live.  How important is it for children and young adults to have role models in STEM fields?

I absolutely love my job as an engineer but growing up, I had no idea what engineering was, or what engineers do. You don’t come across engineers in your daily life like you do doctors, or teachers, or shop workers, so it’s difficult to find out what the career really is. That’s why I think it’s important that engineers like me go out to schools and talk about what we do – so that young people can make an informed decision about whether it’s something they might enjoy too – rather than just never finding out what it is, and not having that opportunity.

I think like most children, my role models were the people I could see – my teachers, my parents, my family. I never wanted to be famous, and I’m terrible at sports, so celebrities were never very interesting to me and I definitely didn’t want to be one!

As I’ve got older I’ve found other people to look up to, both at the company where I work, and in similar industries to my own. Elon Musk is amazing – definitely a visionary of our time. He definitely inspires me but I’m not sure I’d say he’s a role model. I think a role model has to be someone you can aspire to be like; that’s close enough to who you are that you can identify with them, and try to learn to be more like them.

I would say my best role models are the senior managers within my company, and the broader industry, who are great at their jobs, and passionate about what they do, but still have time to teach those who are learning the job how it all works, and who are patient and friendly with everyone. That’s what I aspire to be like.

I would definitely say go for it! Space is a much bigger industry than I think most people realise and there are so many different roles that there really is a job to suit every personality. From designing, to building, travelling, working at a computer, talking to lots of people, or doing lots of detailed analysis, there really is something for everybody! As the industry is growing fast we will definitely need lots more people to join it in the future so it’s an ideal time to get involved! 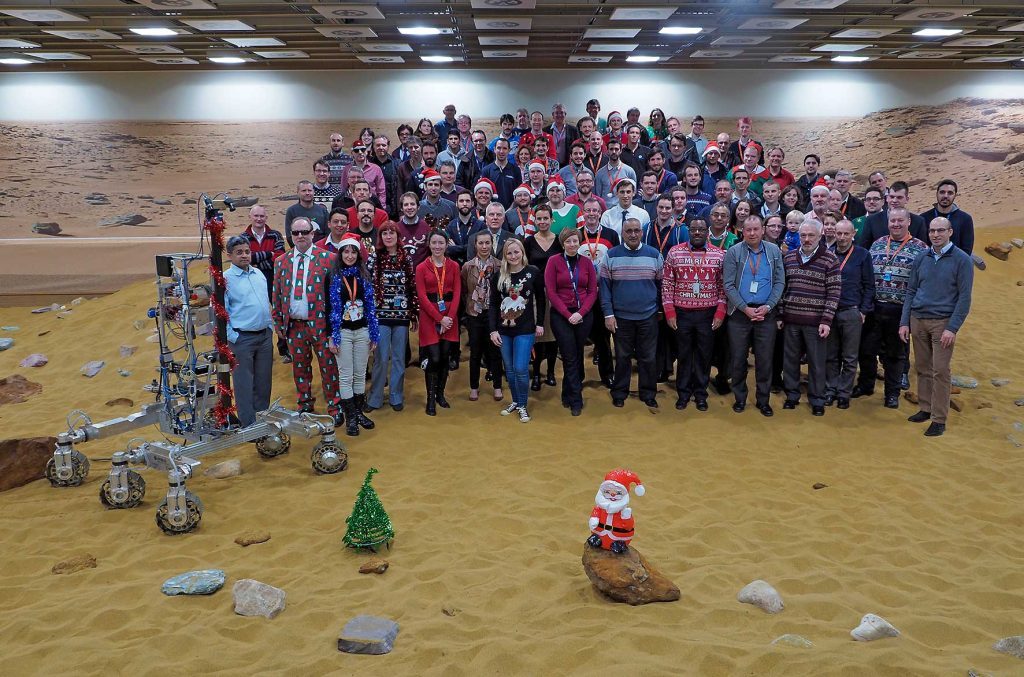 Christmas on Mars … well, sort of!

How did you family help to nurture your interests? What advice would you give to parents/guardians/teachers who recognise an interest in STEM subjects in their own children?

Neither of my parents are engineers, and I think they were quite surprised when I told them I was interested in becoming one! They always said that what I chose to do as a career was my choice and mine alone, and that they’d support me no matter what I chose. That was great as it meant I was free to pick whatever I liked- but a bit daunting as well as I didn’t really know what engineering was and whether I was making the right decision. Fortunately, I had a great physics teacher who found engineering taster days at Universities, and a scheme called the Engineering Education Scheme where a team of students joins up with a local engineering company to do a project – and through those I learnt more about what engineering was, and felt more confident in my choice.

I think the biggest thing is just finding the right information. What does a career in this industry really look like? What subjects do I need to study to get into the right degree courses? What jobs will I be able to apply to once I have that degree? Those were the things that were difficult to find out, but that really helped me to decide what I wanted to do and whether it was right for me.

If you weren’t an engineer what would you be?

I did work experience as an architect, and I looked into degree courses in product design, as I was trying to find a career where I could combine creativity and technical challenge. Once I got to my work experience, though, I found out that architects might design pretty buildings, but it’s civil engineers that then make them work so that they don’t fall over! And product designers might design things, but again it’s the engineers that turn them into reality, and make them function. So I could do either of those things, but I still think engineers have all the fun! For me it’s best balance between having a technical challenge to get your teeth stuck into and your brain working, but still having that fun element of creativity and design.

Abbie Hutty cameos in Activity 3.4 Design Your Mars Rover of the Mars Diary.